CIMF 2022 explored multiple musical and non-musical themes that are essential to the music of Charles Ives and to his legacy: use of folk music, personal dedications in music, polystylism, grappling with spirituality, and a pioneering leap toward an optimistic future. As always, CIMF presented a tapestry of nearly all American works – primarily those of living composers – to delve into these ideas, bring them to life, and tell the story of American music through the many diverse voices that wrote music and write music in the United States.

PULSE
Monday, August 1, 2022 – 6:30 PM
Keeler Tavern Garden House (152 Main Street, Ridgefield, CT)
__
“Pulse” explored uses of folk music in concert music and folk-influenced, rhythm-oriented works throughout the last century of American concert music. Ives was famous for his incorporation of material from folk songs he heard growing up in Danbury, where his father was a bandleader. Ives would hear these tunes played by bands in the area as a child and go on to incorporate them into his own concert compositions in a compelling and personal way while also breaking ground by infusing them with what was decidedly modernist musical transformation, including his famous method of quoting two folk tunes to be played at the same time and in different keys. This program explored works by CIMF Artist-Faculty George Meyer, who grew up in Nashville and is well-known for his work with folk and bluegrass music, including performances with his father Edgar Meyer, a world-renowned classical and bluegrass bassist. The program also featured a new work by Alex Stephenson, winner of CIMF’s 2020 Call for Scores as well as the North American premiere of a new work by Joseph Summer, and Southern Harmony, a work of Pulitzer Prize winner Jennifer Higdon which she describes as a “portrait of the south.” The program closed with William Grant Still’s Danzas de Panama, which is based on a collection of Panamanian folk tunes. CIMF Artist-Faculty Chelsea Starbuck Smith, Jacob Shack, and Mitch Lyon join Meyer on performances of all works.
PROGRAM:
Movement for String Trio – George Meyer (b.1992)
Bloom – Alex Stephenson (2020 CIMF Call for Scores Winner)
Southern Harmony – Jennifer Higdon (b. 1962)
“Where Spain” from The Book of Invisible Women for string quartet (U.S. Premiere) – Joseph Summer (b. 1956)
Rob’s Polka – Väsen
Danzas de Panama – William Grant Still ( 1895-1978) 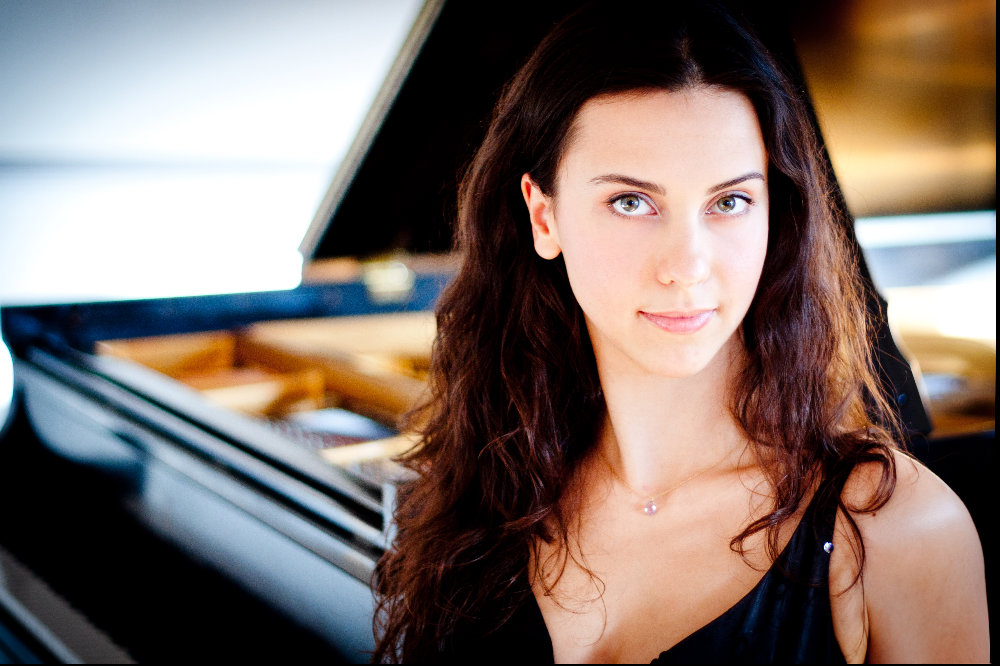 DEDICATION
Wednesday, August 3, 2022 – 6:00 PM
Private Residence in Ridgefield
__
“Dedication” featured works with a significant personal influence or dedication. In addition to the fascinating musical process by which Ives weaves in his quotations, they have a particular resonance in our community because so many of them relate to places and figures important to our present and past, demonstrated deftly by titles like Runaway Horse on Main Street, which immediately conjures up images of a horse loose on Danbury’s Main Street over 100 years ago. The program featured world-renowned pianist Anna Petrova performing solo piano works by Eleanor Alberga, a Jamaican composer, whose work “Jamaican Medley,” was written for the 21st anniversary of Jamaican Independence, CIMF Artistic Director Paul Frucht, who’s Four Pieces are a series of musical dedications from composer “Machaut” to several friends, and Rachmaninoff who’s Variations on a theme by Corelli not only are an apparent dedication to Arcangelo Corelli, but also to his friend, famed violinist Fritz Kreisler. MET Opera violinists Julia Choi and Jeremías Sergiani-Velázquez joined Petrova for Chris Rogerson’s Afterword dedicated to a friend and Petrova and Choi were joined by Boston-based cellist Francesca McNeeley for Reena Esmail’s Saans, which was written as a wedding gift.
PROGRAM:
Jamaican Medley – Eleanor Alberga (b. 1949)
Afterward – Chris Rogerson (b. 1988)
Saans – Reena Esmail (b. 1983)
Four Pieces for Solo Piano – Paul Frucht (b. 1989)
Variations on a Theme of Corelli – Sergei Rachmaninoff (1873-1943) 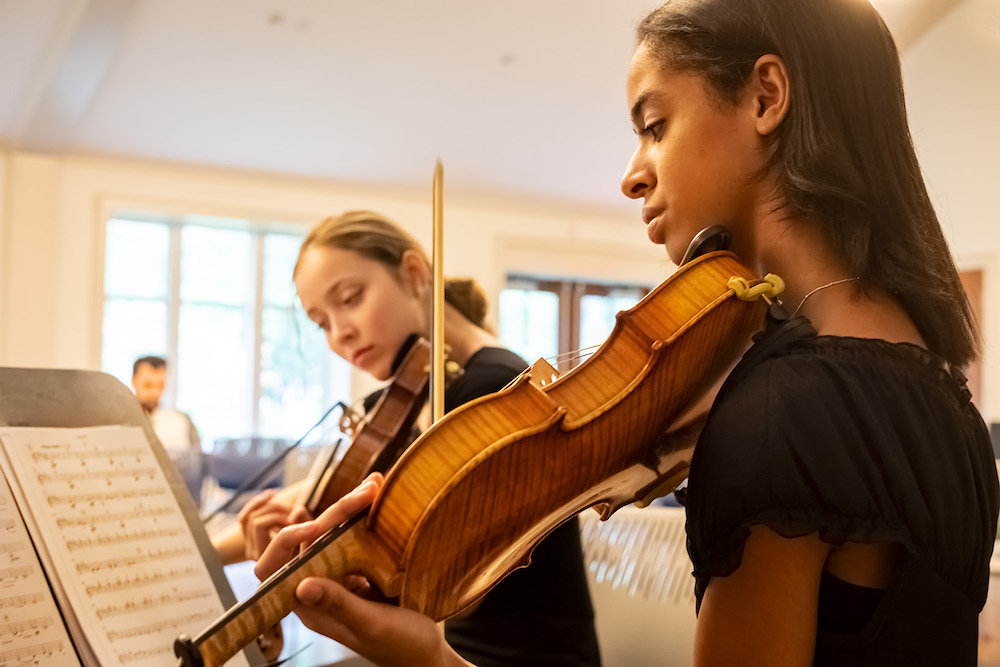 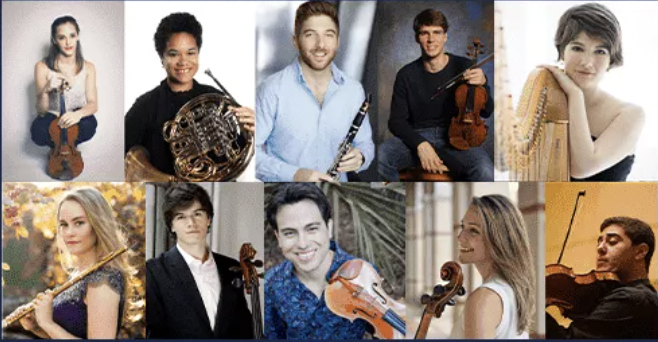 SIMPLE GIFTS
Sunday, August 7, 2022 – 2:00 PM
The Ridgefield Playhouse Tent
__
“Simple Gifts’ ‘ evoked Ives’s legacy of polystylism passed down through generations of American composers who represent the richness of the diversity of styles within American concert music. With no dominant style today, living composers write in an array of styles to portray the diversity of the American experience. The program opened with John Williams’s Air and Simple Gifts, an elegant arrangement of the famous quaker tune written for Pres. Obama’s 2009 inauguration and includes chamber works by Juhi Bansal, CIMF Composer-in-Residence Jared Miller, and world-famous jazz musician Wynton Marsalis whose work At the Octoroon Balls he describes as exploring “the American Creole contradictions and compromises – cultural, social, and political – exemplified by life in New Orleans.” The second half featured Eric Mahl leading CIMF Artist-faculty and guest artists in works by Han Lash, Patrick O’Malley, and CIMF Artist Director Paul Frucht, whose work Essential, for solo horn (performed by CIMF Artist-Faculty Priscilla Rinehart) and string orchestra, portrays the heroism of the essential workers who led us through the horrifying opening months of the COVID-19 pandemic. The program closed with Chris Cerrone’s High Windows for string quintet performed by violinists Chelsea Starbuck Smith and George Meyer, violist Jacob Shack, cellist Mitch Lyon, and bassist, WCYO alumnus, and Ridgefield native Jon Borden, and string orchestra. Cerrone writes that the “title High Windows is a quote, and has two meanings. It is a literal reference to the windows of St. Ann’s Church in Brooklyn, the reverberant space for which I composed the piece; it also refers to a Philip Larkin poem in which the older author sums up the tumult of his youth with the lines:
[…] And immediately
Rather than words comes the thought of high windows:
The sun-comprehending glass,
And beyond it, the deep blue air, that shows
Nothing, and is nowhere, and is endless.
PROGRAM:
Air and Simple Gifts – John Williams (b. 1932)
Cathedral of Light – Juhi Bansal (b. 1984)
At the Octoroon Balls – Wynton Marsalis (b. 1961)
Go! – Jared Miller (b. 1988)
Loneliness in a Beautiful Place – Patrick O’Malley (b. 1989)
Essential – Paul Frucht (b. 1989)
Chaccones – Han Lash (b. 1981)
High Windows – Christopher Cerrone (b. 1984) 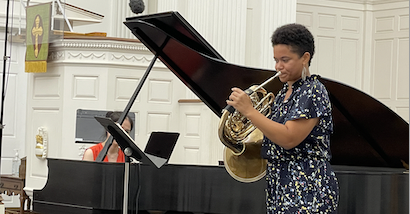 THE UNANSWERED QUESTION
Wednesday, August 10, 2022 – 7:00 PM
Lund Hall – First Congregational Church of Ridgefield
__
“The Unanswered Question” is a direct reference to the Ives work of the same name which so beautifully and enigmatically contemplates humanity’s existence and place in the universe through a blend of simplicity of modernism that is compelling and thought-provoking. This program featured works that also contemplate existence, our greater place in the universe, or the heavens in some way. After an opening performance by CIMF 2020 Virtual Competition winner Kiril Volkov, the program featured a world premiere by Derek Geary as well as works by CIMF Composition Program Director Jon Cziner and Han Lash, whose work Three Shades Without Angels, will be performed by CIMF Artist-Faculty flutist Katie Althen, violist Jacob Shack, and harpist Emily Levin. Will Stackpole’s work Unbeing, features a narration of Andy Weir’s famous short story The Egg, performed by Daniela Sikora. The short story explores the idea of finding the humanity and every person around us and Stackpole writes that “living through 2020 and the seemingly global struggle to realize and remember the humanity of every single person around us finally sparked the idea to create a version of the story with music.” The program closed with Ralph Vaughan Williams’s Phantasy Quintet and Ives’s Unanswered Question with solo trumpeter Eric Mahl followed by CIMF Artistic Director Paul Frucht’s addendum.
PROGRAM:
Violin Concerto No. 4 in D Major, K. 218 “Allegro” – W.A. Mozart (1756-1791)
Glimmer, Flutter – Jonathan Cziner (b. 1991)
Unbeing for a Time – Will Stackpole (b. (1991)
Three Shades Without Angels – Han Lash (b. 1981)
West/East – Derek Geary (b. 1970)
Phantasy Quintet – Ralph Vaughan Williams (1872-1958)
The Unanswered Question – Charles Ives (1874-1954)

NEW WORKS AND NEW WORLDS
Friday, August 12, 2022 – 7:00 PM
Richardson Auditorium at Ridgefield High School
__
“New Works and New Worlds” was a program about hope for the future, no better exemplified than by the youth participants at CIMF whose hard work, talent, commitment, and teamwork is inspirational every year. The program opened with CIMF artist-faculty giving world premieres of four works by student composers: Maxwell Kaye, Eliana Valdivieso, Dmitri Volkov, and Christian Yom. The CIMF Chamber Orchestra then presented works by Brahms and Pulitzer Prize winning composer Aaron Jay Kernis, whose work Elegy (for those we lost) was written in May 2020 as the composer was grappling with the initial impact of the COVID-19 pandemic and the many lives tragically lost. The CIMF Orchestra rounded out the program bringing tragedy to triumph with works by Bizet and Rossini as well as Dvorak, whose “Largo” from his “New World” Symphony No. 9 was inspired by his experience in a new and strange land, America, and his discovery of African American and indigenous folk music. The movement is a beautiful tapestry of the European symphonic tradition and these folk materials that portray and hope for the future.
PROGRAM:
New Works by CIMF Composition Participants
– Maxwell Kaye, Eliana Valdivieso, Dmitri Volkov, and Christian Yom
CIMF Chamber Orchestra
Elegy – for those we lost – Aaron Jay Kernis (b. 1960)
Serenade No. 1 in D Major, Op. 11 – Johannes Brahms (1833-1897)
CIMF Orchestra
William Tell Overture – Gioachino Rossini (1792-1868)
Symphony No. 9 in E minor “From the New World”, “Largo” – Antonín Dvořák (1841-1904)
Excerpts from Carmen Suite No 1 & No 2, plus “Farandole” from L’Arlesienne Suite No. 2 – Georges Bizet (1838-1875)